Continuing with my posts from my recent Sydney trip…

First, let us gaze upon the beauty that is this plump, glistening hypnotically orb-like bursty egg yolk, drizzled with olive oil and studded with freshly cracked black pepper. My dining companion Billy watched, amused, as I gently jiggled the plate to make the yolk wobble…

The morning after Tetsuya’s, I met Billy in the lobby of the hotel to go out for breakfast. Our original plan had been check out Bills (he of the famous creamy scrambled eggs and annoyingly absent apostrophe :P), but now Billy had another idea: “Would you mind if we changed the plan?” He asked. “There’s this place in Surry Hills I’d like to check out – they do this soft shell crab omelette I really want to try.” I was pretty much up for anything, so I told him: “Lead the way!”

The cafe was quiet – only a couple of tables of people, plus us. We studied the menu and considered ordering the Benedict Ish, with crisp soft shell crab, poached egg, baby spinach and hollandaise (AU$18) or the kara age crab omelette, with avocado salsa, chilli, soy and ginger dressing (AU$21). The plan was to order a crab dish plus one or two other dishes to share. I had never eaten soft shell crab before and Billy had talked it up so much I was now really keen to try it myself! Unfortunately, when we placed our order for the kara age crab omelette, our waiter told us it was too early – the deep fryer wouldn’t be ready for cooking until closer to 11am. He was most apologetic… we were most disappointed! We arrived at Cafe Ish before 9am, so waiting wasn’t really an option.

Since returning to Perth I’ve seen other bloggers’ reviews of Cafe Ish. Most of them appeared to have ordered the soft shell crab benedict or omelette dishes for breakfast, so I’m not sure if “no deep fryer until 11am” was just a one-off and we were desperately unlucky, or a weekday policy, or due to something else we weren’t aware of. I’m sure many of my readers would love to eat a soft shell crab omelette for breakfast on a Friday (or any) morning! Feel free let me know in the comments if you like the sound of that! :D

We started our breakfast with hot drinks – hot chocolate for Billy, a pot of Australian breakfast tea for me (I committed the cardinal sin of asking for English breakfast tea, which at the time I hadn’t noticed the menu states they do not serve, as we are in Australia! Hah!). The tiny biscuits served with our hot drinks were cute, but teeny tiny! I was surprisingly hungry despite the six-dish masterclass and ten-course degustation dinner the night before – I devoured that defenceless little biscuit, barely even tasting it (much like a big dog chomps on dog biscuits in one or two bites! Have you ever wondered whether dogs taste half of what they eat? :)).

It was love at first sight when I laid eyes on Billy’s hug mug of hot chocolate. I liked it because it looked like an egg and was so rounded and plump. I totally had cup envy!

As we waited for the food to arrive, our waiter came back to the table with a couple of things – first, he presented us with a selection of flavoured salts – in the photo, top to bottom: citrus salt, volcano salt and chilli salt. We tried all of them, of course, but once we’d tasted the food we both agreed it had been so perfectly seasoned there really wasn’t any need for more salt, or indeed the additional flavour of flavoured salt. It was fun trying the different salts, though! The citrus salt was, well, citrusy, the volcano salt smoky and the chilli salt pleasantly warm at first, with a hot finish.

The second item our waiter placed on our table was a pepper grinder. What can I say, I’m like a little kid and I like toys and gadgets! The pepper grinder was fun to use! (I’m really not hard to entertain! :P) I enjoyed the winding the handle to grind the peppercorns and then opening the drawer to reveal my freshly ground pepper – for some reason, that made me think of being a magician and gave me a secret thrill – “secret” in that I didn’t say anything about it to Billy at the time. Not surprisingly, I felt kind of shy and silly thinking about being a magician!

When our waiter found out we were planning on sharing our dishes and that we were keen to try as many of the breakfast menu items as possible, and I was particularly keen to try the baked beans, he suggested we order a Big Ish – Cafe Ish’s version of a full breakfast fry-up, as it comes with a side of baked beans. Since we were also keen to order the Croc in a Rock (Cafe Ish’s take on egg in a hole, or what Jac calls a bull’s eye), which features crocodile sausage, our waiter kindly offered to substitute the crocodile sausage that is normally part of the Big Ish with a kangaroo sausage instead, so we’d get to try both kinds of sausage. He offered – we didn’t need to ask!

The baked beans (I shifted the greens with my fork before taking my photos) were not too sweet – they were smoky and porky in flavour, not surprising, seeing as they had been cooked with pork hocks (“four big pork hocks,” our waiter had proudly told us), and there were tender chunks of pork in the beans too – totally my kind of baked beans!

The Croc in a Rock was delicious! In the centre of the chunky toast was egg, with shallots, fetta and crocodile sausage. The eggy centre was soft (actually, I’d have liked it even softer so it oooozed out of the bread when cut in half – that would’ve been wonderful!). The melted fetta cheese added creaminess to that delicious gooey centre, but for me the best part was definitely that spicy, tasty, tender crocodile sausage. This was my first time eating crocodile, and it was an EPIC WIN! The Croc in a Rock came with a dish of tomato relish which was quite sweet and a perfect accompaniment to the salty sausage, fetta and egg.

After delivering our breakfast dishes to the table and while Billy and I admired the dishes and took photographs, our waiter returned with two spare plates for us to eat off (so we didn’t have to dig into the dishes at the same time or need to swap plates). This was the breakfast I assembled for myself on my plate (left to right): baked beans, fried egg, mushroom, bacon, kangaroo sausage (again, carefully sliced into two) and roasted tomato. The kangaroo sausage was very meaty. Its taste and texture reminded me of homemade sausages, which tend to be heavy on the meat and much lighter on the “filler” and fattier ingredients that result in more “springy” sausages. It was tasty, but on the verge of too heavily meaty for me – I was secretly glad I only had half a roo sausage to eat! The tomato was sweet, the mushrooms juicy, and the bacon had a good lean to fat ratio – I really enjoyed my breakfast.

Having finished his hot chocolate, Billy ordered Cafe Ish’s signature coffee – the wattle maccacino, and after tasting it pronounced it as one of the nicest coffees he’d ever had.

For me, there were three highlights of our breakfast at Cafe Ish:

Oh, and of course it was fun having breaky with someone as keen to take photos of the food as me! No sighing, rolling of eyes or fidgeting! :P

As it turned out, I ate soft shell crab for the very first time that evening at dinner at Saké Restaurant and Bar – and I loved it. So I was even sadder to have missed out on that soft shell crab omelette.

Next time I’m in Sydney I will definitely have to return to Cafe Ish to taste that elusive soft shell crab omelette (yes, yes, I have developed an obsession). But I’d also love to order the Croc in the Rock – one all to myself this time – so I can enjoy a full serve of that tender, chewy, spicy crocodile sausage all over again. Isn’t it great when a restaurant’s dishes inspire you to hatch eating strategies and think greedy thoughts? :D 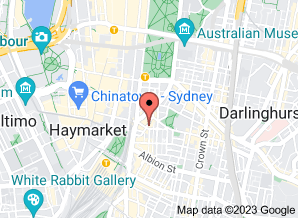 See the list of posts about my Sydney trip.

Read Billy’s post about our breakfast at Cafe Ish at his blog A Table for Two – PS. Billy, it was great to meet you! Boo’s a cute name, but I prefer to be called TFP. LOL. :P Hope we’ll get to eat together again sometime!