A sunny Sunday morning. I’d wanted to sleep in but Jac was keen to go to swap meet at Centro Maddington car park (run by the Rotary Club Thornlie every Sunday from 6am). After swap meet, with a pile of newly purchased secondhand cookbooks on the back seat (a successful outing, by Jac’s standards), we drove around in search of breakfast – until we saw this sign that shouted: Wake Up! We hadn’t realised Chicken Treat does breakfast. Jac was instantly intrigued and wanted to try it out. I didn’t resist.

We each ordered a combo meal: a breakfast burger, hash brown and drink (coffee for Jac, juice for me). This was Jac’s chicken pattie, bacon, egg and cheese burger. It is taller than a McDonald’s McMuffin, the bun a similar size to the McDonald’s cheeseburger.

Unwrapped, it looked really good. Not like the usual “looks like someone sat on it” or “just threw it together” fast food fare. I was impressed. Jac took the first couple of bites, then I gave it a try – YUM! The chicken pattie was delicious! The bun was nice and chewy. The chicken pattie, bacon, egg and cheese combined to make every bite a salty proteiny heaven. For this salty-toothed carnivore, anyway.

My sausage, bacon, egg and cheese burger, on the other hand, DID look hastily slapped together AND like someone had sat on it. In fact, they forgot my burger initially. When it finally arrived and I unwrapped it, it looked like this. Ugly as it was, it tasted good, though not as tasty as the chicken pattie, bacon, egg and cheese burger. I’d have liked an extra chicken pattie all to myself! My sausage pattie burger would’ve been totally jealous of the chicken pattie burger’s handsome looks. Yes, I could’ve complained and sent it back and insisted on a nicer looking burger, but to be frank I was starving by this time and wolfed it down after photographing it. Now compare this photo with the first picture in this post (the “Wake up!” banner). It’s a prime example of the real thing looking significantly less attractive than the advertisement (though in this case I reckon the banner image looks surreal, which I don’t necessarily find that appealing).

The hash browns were large, greasy and floppy. Not that great. I don’t mind greasy but I prefer this style of hash browns to be crispy on the outside, fluffy on the inside. These were impossible to pick up without falling apart.

I wouldn’t call Chicken Treat’s breakfast a “homestyle brekky”. It’s a typical junk food breakfast. It tastes pretty good though, so if you are after a junky breakfast that’s a little different to McDonald’s McMuffins and Hungry Jack’s non-McMuffin muffins, I’d give it a go. It would probably work well as a hangover “after a big night” breakfast.

Pretty sure not all Chicken Treat stores do breakfast (there is no mention of breakfast on the Chicken Treat website), so if you’re interested, the Maddington store details are below. 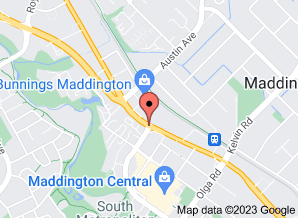 Perth readers, if you know of other Chicken Treat stores that do breakfast, feel free to mention them in the comments.