Coco’s Restaurant is located by the Swan River on the South Perth Esplanade and has been around for over 18 years. Jac took me to Coco’s on a surprise dinner date recently. Neither of us had been there before.

The menu is extensive and I had a hard time choosing what to order. If like me, you’re prone to indecision followed by regret and food envy, this menu will perplex and torment you!

We started with garlic bread (AU$6). Despite the flavour promise of char grill lines, the bread was not buttery or garlicky enough for me.

Jac’s first course was the cured salmon gravadlax with ciabatta wafers, lemon creme fraiche, salmon caviar and fresh dill (AU$27). This should have been harmony on a plate but the “fried” flavour of the crispy ciabatta wafers was too strong – plainer crackers would’ve been better. Still, Jac enjoyed this dish.

For my first course I chose the free range chicken risotto with field mushroom, champignons, porcini and herbs, topped with shaved parmesan (AU$29). It may seem extravagant to spend almost $30 on a plate of risotto for a first course, and yes, I agree, it’s pricey, but I am not exaggerating when I tell you this was the best risotto I have ever eaten. The risotto was abundant with chunks of tender grilled chicken breast and mushrooms, and it was simply no effort to get chicken and mushroom in every mouthful. Even Jac, normally not a risotto fan, had a taste and wanted more. The next time I’m at Cocos, if this dish is still on the menu, I will be terribly tempted to order it again – in the main course size so I can enjoy it for even longer! The serving size was substantial, so generous that I initially thought they’d served me the main course size by accident.

For her main course, Jac chose the traditional beef carpaccio served with baby capers, rocket, truffle mayonnaise and aged grana padano shavings (AU$38.50). The beef was tender, sliced to a delicate fall-apart thinness, layered with peppery fresh rocket, sharp salty capers and lashings of rich truffle mayonnaise – the cheese shavings added colour and texture but were probably an unnecessary addition to the flavours. To quote Jac, this dish was “absolutely beautiful”. She declared she would go back to Coco’s just for this dish.

For my main course I chose the grilled Geraldton dhufish served with seasoned buttered potatoes (AU$46.50). The fillet of dhufish was buttery and golden crisp on the outside, moist and tender on the inside. The potatoes had been tossed in a kind of herby remoulade, making them almost too rich and wonderfully, dangerously delicious.

We shared a garden salad (AU$13.50), with avocado, asparagus, vine ripened tomatoes, cucumber and cubes of pickled beetroot. The menu described the dressing as seeded mustard and orange – I could taste mustard but nothing vaguely citrus. I found myself searching for salad untouched by the odd-tasting dressing.

The food was very good (albeit pricey), but the restaurant was unbelievably noisy! Maybe they were just having a bad night, but it seemed as if staff kept dropping things that smashed and clattered on the floor. The door to the kitchen squeaked loudly, badly in need of some WD40. If the noise levels we experienced are typical, I wouldn’t recommend it for a romantic dinner. Sadly for Coco’s, we’ve probably talked about the noise more than the food when telling our friends and family about our dinner there.

The restaurant was very well staffed, with perhaps too many staff having started work all at the same time, at the start of the dinner shift. We were there for a 6.30pm reservation, before the majority of dinner bookings trickled in. Staff noticeably and repeatedly circled the floor, searching for things to do. It’s hard not to pick up on that desperation. With so many staff on, thankfully service was good – our table was cleared promptly, second and third round of drinks offered and water topped up.

The risotto and carpaccio were magnificent, but not many people would want to eat it in the middle of Grand Central Station! Next time, maybe a table outside for a great view and less BANG, CRASH! We didn’t have much of that famous view from our particular table inside.

27 March 2011 EDIT: Since I posted this, friends and family who’ve been to Coco’s have told me they also found it noisy! And a number of readers have commented on the noise too. So it seems that the noise levels we experienced should probably not be blamed on a “bad night”. 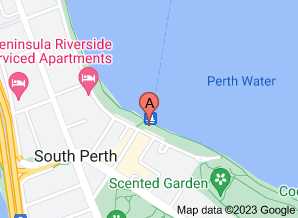