I’ve been meaning to check out Chocolateria San Churro, fondly known as San Churro, ever since friends told me they had opened stores throughout Perth. Last month, I got my chance!

Jay ordered the Azteca (AU$5.90), a traditional Spanish-style hot chocolate flavoured with cinnamon and chilli. Jay invited us to have a taste and we all carefully took a sip – it was served super hot. I loved the richness and creaminess of the thick hot chocolate (I like my hot chocolate thick and strong – no need to add sugar) but found the cinnamon too strong for my liking. The chilli left a pleasantly warm afterburn.

There is a range of Spanish hot chocolate varieties to choose from, or couverture hot chocolate made with pure melted couverture milk, dark or white chocolate if you want something just as decadent but less spicy.

Jac ordered an iced mocha (AU$5.90) which was served in a tall glass, sprinkled on top with chocolate flakes. It was also extremely creamy and rich.

Chocolate con churros. Churros, churros, CHURROS. I was here for churros and could think about nothing else. You have a choice of:

The churros are fried fresh to order and we soon heard the sizzle of hot oil and were breathing in a gorgeous aroma I can only describe as golden. “That’s our churros,” I told Jac, somewhat breathlessly as I fidgeted like an impatient child (or simply an impatient adult who adores a fresh doughnut).

Juji and Jay ordered churros for two with dark chocolate and dulce de leche. I tried some of the caramel – it was sweet and milky (you can google recipes for homemade dulce de leche made with condensed milk).

Since Jac wasn’t interested in churros (“WHAT?!” you exclaim! :D), I ordered churros for one with dark chocolate dipping sauce. I like dark chocolate best, then milk, then white (which purists will point out is not actually chocolate).

The churros were crisp and light, beautifully hot and fresh without a hint of greasiness. They had lots of little spiky ridges all over them that crisped up beautifully. Imagine spiky hot chips (fries) – that would be way better than crinkle-cut chips!

Despite liberally dipping my churros into the chocolate, there was far too much chocolate in the pot for three churros. So when the churros were all gone, I ate the chocolate straight out of the pot. This is rich, indulgent chocolate coma territory. You have been warned!

While ordering at the counter I gazed at all the chocolate cakes and truffles on display, noticing with excitement that there were macarons available. I bought one of each kind – chocolate and vanillla.

We quickly reached chocolate overload thanks to the hot chocolate and chocolate dipping sauces – and there was no way I could even attempt to eat the macarons after everything else. I took them home in a little brown bag for later. After all the rich chocolate we’d consumed, I was surprised when I tasted the macarons later – the chocolate macaron didn’t have much flavour at all. I thought both macarons needed more filling. I will definitely return to San Churro for chocolate con churros and hot chocolate (and I’d like try some of the truffles), but not the macarons. 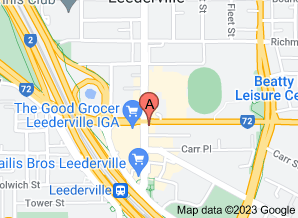