Last Wednesday, I joined a table of Perth food bloggers and food lovers, our partners and friends for a night of memorable dining at Amusé Project, a special degustation dinner prepared by the young chefs and service team at Restaurant Amusé in East Perth. Last year I attended the Largesse Dining event held at Restaurant Amusé.

In the Amusé Project booklet made specially for this event, there were profiles of the staff members responsible for the meal, the night’s menu, notes on the matching wines, and Chef Hadleigh Troy and his wife and co-owner Carolynne explained what Amusé Project is all about. In addition to their normal duties, each member of staff takes on a project, which may be a technique, component, cocktail or dish of their choice, that he or she works on and submits on a Saturday for discussion and critique. Over a period of eight weeks, the projects are refined and perfected. The Amusé Project dinner was the showcase for some of these projects.

We didn’t know what would be on the menu until the night itself, but that was part of the adventure and appeal.

As each course was served to our table, out would come the cameras. Conversation would cease as we focused on our plates, peering through viewfinders and LCD screens. But we (and our long-suffering partners and friends) are all used to this. After the obsessive photographing of dishes from multiple angles, we would taste, then discuss the dishes, keen to identify mystery ingredients and flavours, and determine the techniques used to prepare them.

To begin, two cocktails created by the restaurant manager were served, alternating between guests. I got the cherry ripe martini and Jac the dirty jelly martini. Creamy dark chocolate floated and melted into the intensely sweet cherry liqueur; it was strongly boozy but very tasty. The dirty jelly martini was made with a locally produced gin. In the glass were translucent jelly cubes made with olive juice that seemed to dissolve into the drink. I only had a sip as it was (Wooooooo! STRONG!) even more boozy than the cherry ripe martini and much too strong for me.

To call these appetisers “snacks” really didn’t do them justice. They were intriguing and intricate in appearance, taste and texture.

First, two kinds of crisps unlike any I’ve ever seen before, served with sour cream for dipping. Both were light and delicately textured but surprisingly different. The oat crisps were gorgeously buttery and extremely moreish. The pumpkin crisps were almost transparent shards that melted in the mouth.

The next platter of snacks was eye-catching and I was momentarily overwhelmed with the choice of where to start. On the basalt platter were chiffon-soft olive “sponges” that looked almost mossy, each topped with a smear of cream cheese; watermelon pastilles with creamy prawn filling; and grissini (breadsticks) wrapped with lamb tartare studded with finely chopped cornichons.

Which would you choose to eat first?

The bread and butter was such a pleasure to eat. The butter was a perfect softness for spreading on the fresh, crispy crusted bread which was served wonderfully warm. In my butter spreading joy I ended up with way too much butter on my knife, so I passed it to Juji to butter her bread with. I was conscious of the danger of filling up on bread with six courses to come but I couldn’t resist reaching for a second piece. I was surprised to find it was still warm. We soon worked out the trick behind that bit of magic: hot rocks at the bottom of the bowl.

This was a very pretty dish, inspired by chef Gianni’s part-Finnish heritage. The kingfish was served two ways: pickled and apple wood-smoked. The fish was sweet and tender, garnished with fresh dill tips, fine slivers of spanish onion and sliced cucumber, micro herbs, drops of vividly green dill oil and a smear of creme fraiche. This was Jac’s favourite dish of the evening, and I enjoyed it very much too.

The two chunky little cubes of moist, tender roasted pork belly were served with a crispy fried crumbed ball of creamy onion puree (hidden behind the pork in the photo – like a Hungry Jack’s onion ring but better) and a cluster of baby oyster mushrooms, all sitting on an inky black mushroom reduction and a blob of red capsicum (I think) sauce. I saved the fine pork skin crisp (it was a crisping, not a crackling!) to the end for a last savoury pleasure.

The beef fillet was tender soft, cooked sous vide then seared briefly on the outside. The squid was ever so lightly seasoned and battered and cooked to perfection. The pickled watermelon rinds were wafer-thin, crisp and sweet-sour acidic, served draped on mini fondant potatoes. The sauce was a complexly flavoured salsa verde, which we later found out consisted of 20 different ingredients.

Fourth course: Coconut on the beach

This was simply spectacular. On each plate, a sphere of coconut ice sitting on toasted coconut and pineapple “sand”. We were told to tap on our spheres with our spoons to crack them open.

Fourth course: coconut on the beach

Inside the coconut ice ball was pineapple sorbet and coconut espuma (foam). I squealed in delight (yes, I have no shame) when I tasted my first cold creamy spoonful of sorbet/espuma and felt it fizz on my tongue like sherbet. The toasted coconut crumbs provided a crunchy contrast and combined with the pineapple to taste like pineapple jam tarts. I haven’t stopped thinking about this dessert and will be raving about it for a long time.

If you watched the Iron Chef Australia episode that featured Greenhouse head chef Matt Stone as the challenger (I have a post featuring Greenhouse coming up soon), you may remember one of the chefs that assisted him was his brother Jake. Jake created a similar dish on the show for the mystery ingredient, which was coconut. Jake chose to produce this dish for his project to prove that he could replicate it in a restaurant scenario. Well, Jake, you succeeded and created a showstopper!

As the plates were placed before us, chef de partie Luke arrived to add the final touch: liquid nitrogen caramelised white chocolate ice cream. It was another moment of wonderment as the super cold ice cream hit the plate and the mist rose up like the smoke machine special effects in a horror movie. The liquid nitrogen froze the ice cream into strange, irregular shapes that reminded me of attapulgite (cat owners may know what this is). It was my first time eating liquid nitrogen ice cream and I loved it.

Regular readers will know I detest beetroot. People describe its flavour as earthy; to me, it tastes of dirt. Even with all the wonderful chocolate, the beetroot still tasted like dirt to me. I ate and enjoyed all the chocolate elements, leaving the beetroot elements behind.

This Tasmanian cheddar has a strong sharp flavour, with a flaky yet creamy texture. It was served with poppy seed and water crackers, fruit loaf and head waiter Kim’s family recipe mandarin and beetroot jams. Other than swiss-style cheeses, cheddar is my favourite, and I enjoyed this cheese, though I was starting to feel a little too full. It was a lovely way to end the meal.

After this, the team responsible for this amazing meal was introduced to the now very full and content 60 or so diners, and a brief Q & A session followed. The team members then wandered through the dining room to have a chat with the diners. They were quite shy when coming over to our table but the creativity and pride these chefs have in their work was clearly evident, not only in the exquisitely presented and precisely crafted dishes we ate, but in the way they talked with joy and passion about their dishes, inspirations, techniques and ingredients. Throughout the evening, sommelier Samuel Davies talked to us about the matching wines.

It was a wonderful night and a magnificent meal. My favourite dishes were “pig, mushroom, onion” and “coconut on the beach”. I hope that Restaurant Amusé will make Amusé Project a regular dining event. 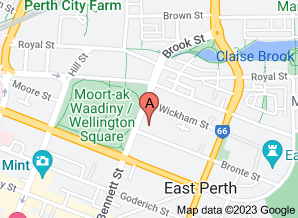 March is the City of Perth’s food and wine month, Eat Drink Perth. To find out about events: