Last month, my sister Juji and I had a day off together and planned to go to Fine Food Western Australia, a trade show at the Perth Convention and Exhibition Centre for the food and hospitality industries. We expected to indulge in free tastings at the show and so met up beforehand for a light breakfast at Jean Pierre Sancho, Perth’s first French Boulangerie Patisserie. If that name sounds familiar, it’s because I wrote recently about the wonderful crusty sourdough bread they supply to Rockpool Bar & Grill Perth.

Jean Pierre Sancho’s bread is made by hand every day and comes in different varieties, shapes and sizes. Their sandwiches are made daily using crusty bread rolls baked that morning and are available for dine-in or takeaway lunches. There is a wide selection of quiches, croissants, cakes and pastries on display in the shop for your drooling pleasure, all made fresh daily.

Juji wanted a banana croissant but they were all spoken for, so instead she had a pain au chocolate (chocolate croissant, AU$3.70) and a very frothy flat white, served with a tiny buttery biscuit.

Chocolate croissant with a flat white

If I had ordered this croissant I would attempt to eat it layer by layer, slowly unravelling its scroll, working my way to the dark chocolate in the centre. I eat cinnamon buns in the same way (minus the chocolate part).

I had a raisin brioche (AU$2.90) with English breakfast tea. According to Juji, my eyes lit up when I spotted the brioches. I’m sure my eyes not only lit up but sparkled too, as I love brioche and was delighted to see the perfect little plump raisin-studded buns. Brioches without raisins were also available. Not many bakeries in Perth sell brioche, so when I see it, I get quite excited and immediately feel compelled to order it. What’s your favourite French bakery item? I also love custard-filled pastries.

The brioche was soft and buttery, but I thought it would’ve been even better served warm and with more butter. I didn’t think about this until I started eating the brioche, and no option was offered when I ordered it.

It was a very pleasant, light start to what ended up being a glorious day of eating and fun. I try to make sure I can describe all my days off that way! I don’t take many days off work and tend to squeeze as much I can into them. On the day off before this one, I ate fish and chip gelato and went to the first Twilight Hawker Market.

Next time I’m at Jean Pierre Sancho I plan to try their macarons. Stay tuned for that – with luck, next month. 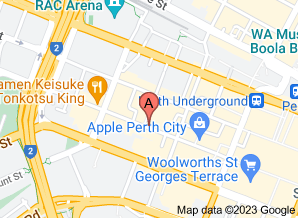 Macarons now $2 each
They deliver within the CBD free of charge for orders over $30.
There’s a second Jean Pierre Sancho at 111 St Georges Terrace, Perth, one Monday to Friday 6.30am to 6pm.

As an aside, after delivering our order to our table, the staff member smiled and said in a French accent, “Bon appetit, mademoiselles.” We both had instant flashbacks to the Madeline cartoon series we used to watch on TV. Did any of you like that cartoon series too? The books by Ludwig Bemelmans which the cartoons were based on were popular items at our local public library. The original cartoons were narrated by Christopher Plummer, who played Baron von Trapp in the movie The Sound of Music.