A couple of workmates and I celebrate the end of another year with lunch at Charm, a Korean-Japanese restaurant on Hay Street, a couple of shops up from the Grosvenor Hotel. It’s around 12.30pm when we arrive, and it’s busy. Luckily, there are a few tables still available.

In choosing a starter, A declares a fondness for samosas (AU$4.50, 4pcs), so we order a serving to share. It’s not very Japanese or Korean and there isn’t much filling in them but they’re fresh and crisp, almost too hot to hold with our fingertips. The sweet chilli is run-of-the-mill bottled stuff, but goes well. I wouldn’t jump to order this again though.

A orders the teriyaki beef lunch special. Despite the menu stating that the lunch special version of the teriyaki beef is “not in bento” (at dinner you get the full bento with teriyaki beef, salad, rice, pickled radish and miso soup), it arrives served in a bento box – with empty compartments looking sadly sparse and incomplete. A enjoys the beef, which is tender and well flavoured.

K orders the cha jang noodle lunch special, with minced pork, cabbage, onion and zucchini in black bean sauce (AU$10). Cha jang noodles are tasty but can often resemble sludge in a bowl and this is no exception – it looks like a tar pit littered with random flotsam, in this case, a quail’s egg and eight peas. It smells great though!

The noodles served at Charm are made fresh on the premises. K slurps up her noodles, stirring the sauce through and between mouthfuls, tells me it’s delicious. I’m impressed she gets not a single drop of black bean sauce on her shirt – but then again, she didn’t wear a light-coloured shirt. Do you suffer The Curse of the Light-Coloured Shirt at Mealtimes? Jac does – it’s almost as if she summons the laksa sauce particles to leap out of the bowl to stain whatever light-coloured shirt she’s wearing!

Behind the front counter where you pay, there’s a window with a sign above it with arrows pointing, “Home made noodle from here”. I peer through the window to try and catch a glimpse but the man making noodles doesn’t seem happy that I’m watching (I’m just looking, not even pointing my camera at him). Did no one tell him he’s been put on display?

Service isn’t great – privacy screens have been placed between some of the tables but this is possibly the worst idea ever for a restaurant with inattentive staff. We have to wave at a staff member to remind her to come back and take our order, and then our drinks get forgotten – the food arrives before the cans of soft drink even though we ordered both at the same time.

Can wonderful home-style fresh noodles cancel out the annoyance of lacklustre service? Let me eat more of those noodles and I’ll get back to you. 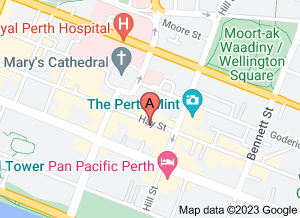 Get to Charm via the Red Cat – stop at Perth Mint