On the Friday of our Canberra trip, we got up early and walked to Civic for breakfast. We’d walked past Cafe Essen a few times and seen magic words on the specials blackboard: corncakes, French toast, pancakes, bacon, maple syrup. It was a crisp cool morning and we enjoyed the walk. It also felt good to exercise, knowing we would both probably be eating a big breakfast very shortly.

I ordered fresh orange juice (AU$4.20). Apart from my first cup of tea in the morning, my favourite breakfast beverage is a tall glass of icy-cold freshly squeezed orange juice. It was sweet and refreshing.

Jac ordered a Buzz (AU$6.50), a blend of banana, honey, ice cream and milk with a double shot of espresso, served in a tall stainless steel milkshake cup. After a few sips she declared “buzz” to be a most appropriate name. I had a sip – it was delicious! Like a creamy banana smoothie with a kick.

I was torn between pancakes with bacon and maple syrup (AU$10.50) and French toast with bacon and maple syrup (AU$12.50). After much deliberation I eventually chose French toast. I was thrilled with my choice when I laid eyes on the dish placed before me. The gloriously shiny and syrup-soaked bacon was piled on top of two plump pillows of chunky French toast (or maybe that should be mattresses!) sitting in a pool of more maple syrup. I was intoxicated by the smell of bacon, syrup and cinnamon and couldn’t stop smiling.

I rolled every mouthful of bacon and bread in syrup. The toast was buttery, soft in the middle and nice and chewy.

Jac ordered the corncakes with bacon and maple syrup (AU$10.50). The two crispy corncakes and bacon were served with a slice of buttered chunky white toast. The maple syrup was served separately in its own dish so as not to soggify the corncakes. I immediately wanted to dip my finger into that little pool of maple syrup too.

It looked like some of my icing sugar garnish ended up on Jac’s corncakes. :)

I also couldn’t wait to have a bite of corncake.

The corncakes were homemade, served freshly fried, golden brown and piping hot, made with corn, potato, capsicum, peas and carrot. They were delicious with maple syrup but would’ve also been lovely with tomato sauce or chilli sauce.

Other breakfast specials included: crepes with berry compote and banana served with cream or ice cream (AU$11.50), Greek omelette with feta, spinach and prosciutto (AU$12.80) and homemade baked beans (AU$10.50). Essen’s menu extends beyond the blackboard and all the food we saw that morning looked and smelled wonderful. I couldn’t help ogling cheese soldiers arranged like Jenga blocks on a plate – I felt a glutton’s rush of food envy for the bread sliced into chunky fingers, topped generously with cheese then toasted. I like a cafe that cuts all its bread chunky and toasts it to chewy.

It’s cosy inside the cafe, but we sat at a table outside. The gas heaters overhead had us comfortably toasty before long. It was fun to sit there eating my maple syrup-soaked bacon and watching the daily commuters on their way to work. 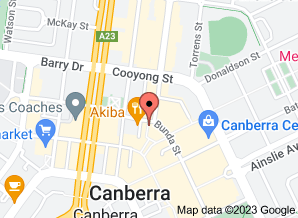 Sculptures in the city

We went to Canberra city a few times on our trip and I liked the very interesting scultures all over the mall. Here are just some of them. We thought this one, featuring two sheep, was quite ahem, suggestive…I know that’s how sheep are held when being sheared, but it’s very “come and get it”, don’t you think? :)

This (below) was Jac’s favourite of all the sculptures.

My favourite was the giant cushion. Our cats would totally sleep on that. I imagine the cushion would get hot in the sun though. I kept imagining our furry babies sitting on the metal cushion and for a moment, I really missed them.

See the full list of posts from our Canberra trip, November 2010 in correct reading order.