Bull Creek Hawker is located at the busy shopping village on Parry Avenue in Bull Creek.

We pulled into the rather congested centre car park just before 12 noon. We were both starving – neither of us had eaten breakfast. It was Sunday and the place was buzzing with activity. Apparently lots of people go shopping on Sunday in Bull Creek. They also go there in droves for hawker food.

My heart sank a little when I spotted the queue outside Bull Creek Hawker but it also made me 1) think we’d made a good choice and 2) want to eat there all the more. The old Chinese couple in the line before us shared a useful tip: don’t just join the queue, make sure you go inside and let the manager know you’re waiting – otherwise someone else may walk straight in and grab the next free table. Not everyone plays nice when they’re hungry.

After what seemed like an eternity of embarrassingly audible tummy rumblings, mostly from me, an outside table became free. A staff member cleared the dishes and wiped the table down. It was our turn to make others envious.

The photos in this post probably don’t capture the true experience of eating at Bull Creek Hawker. Inside the too-small restaurant it was absolutely packed to capacity and noisy with noodle-slurping, chicken bone-sucking, the click-clack of chopsticks and scraping of chairs. Waiters wove between tables, carrying steaming and sizzling plates of food dangerously close to diners’ heads. The clientele were mostly Asian. There was a lot more eating than talking going on. The food looked and smelled delicious. Outside, there was a constant queue.

The old Chinese couple’s lunch arrived before ours did. I couldn’t help watching greedily as the woman grabbed chopsticks and spoon to toss the hor fun, beef and vegetables through the egg sauce. I could see the noodles were brown-tinged, a sign that they’d been fried in the wok for extra flavour before being drowned in the thick egg sauce.

I’d ordered the Hainanese chicken rice (AU$8.00) and was pleased to be asked if I wanted the breast or leg. Of course I chose leg.

Hainanese chicken rice is one of my favourite dishes of all time. The rice is the best part – it’s fragrant, savoury rice that has been cooked in chicken stock, garlic, ginger and sometimes flavoured with pandan leaves and a little chicken fat too. It’s served with a bowl of clear chicken soup derived from the stock that comes from boiling the chicken, often garnished with freshly chopped spring onions. I could’ve eaten a big bowl of Bull Creek Hawker’s chicken rice with nothing else and been perfectly satisfied – that’s the sign of a really good chicken rice. The chicken was served at room temperature as it often is in Malaysia and Singapore. The flesh was smooth and moist, the skin like soft jelly.

I’m always on the look out for Perth’s best Hainanese chicken rice. I still think the Wok Inn at Murdoch University and Tak Chee House in Northbridge are among the best. Bull Creek Hawker is a worthy contender. Ang’s Malaysian at Dog Swamp Shopping Centre in Yokine used to be my parents’ favourite place for chicken rice, but the business has been sold and renamed Hong Kong Tak Kee Restaurant – Perth’s definitely lost a good Malaysian eatery there.

Jac ordered the curry laksa with chicken, prawns and fish balls (AU$9.00). This dish is huge! The hefty bowl of steaming hot curry soup fogged up my camera lens. The thick, sludgy, murky broth was full of tasty treasures: two kinds of noodles (thin rice noodles and thick yellow egg noodles) and plenty of shredded chicken, prawns, fish balls and tofu skin that soaked up the curry like sponges.

I keep telling Jac the best way to eat laksa and avoid splashing curry soup on her clothes is to lean in and get her face as close to the bowl as possible. When I eat laksa, my glasses fog up but it’s much easier to give them a quick wipe afterwards than worry about getting curry stains on my clothes. Leaning in close also means I get to breathe in the glorious spicy aroma as I eat.

We shared a serve of loh bak, Chinese five-spice pork rolls wrapped in beancurd skin and deep-fried till crispy, served with chilli sauce.

The crispy fried beancurd skin is my favourite thing about loh bak. I especially love the crinkly crackly ends. In the pork filling are crunchy chopped water chestnuts.

We also shared a plate of fried kuey teow (AU$9.00). It had a wonderful charry “wok hei” flavour, with lots of bean sprouts, fish cake, chicken, egg and at least three large bursty prawns. It was really tasty but missing the special touch of fried lard croutons – with lard, it would’ve been sensational.

If you’re sitting outside, the staff will ask you to pay as soon as you’ve ordered, presumably to guard against you “doing a runner”. While I was inside paying, the old Chinese couple told Jac: “You ordered too much food.” This write-up has probably demonstrated it wasn’t a particularly private dining experience!

Bull Creek Hawker – a break in the queue outside, but still a full house inside.

As I paid for our takeaway containers, I heard a man telling his wife: “No more laksa! Ya, they cooked a big pot, all gone. So I got chicken rice lah.”

There’s a message in that for prospective diners of Bull Creek Hawker: Go early! 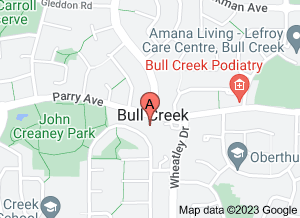 TFP dined at Bull Creek Hawker with compliments of Malaysia Kitchen. All opinions are my own.

EDIT, 1 September – RESULTS: Thank you so much to everyone who voted and helped spread the word! The results are out and it’s official! I’m going to Malaysia!

This was my third post for the Malaysia Kitchen Blogger Summit. I had a wonderful time eating and photographing dishes at four of Perth’s Malaysian restaurants. I hope my posts captured at least some of the diversity, complexity and deliciousness of Malaysian cuisine.

Thirteen bloggers across Australia reviewed local Malaysian restaurants throughout August for a chance to win an all-expenses paid trip to Malaysia for the ultimate food lovers’ adventure. At the end of August, the three bloggers with the most reader votes across all their posts were announced as the the winners.

Thank you once again to everyone who voted for me and helped spread the word! A Malaysian eating adventure awaits… stay tuned!